Windshields, introduced in 1904 were an option to protect the driver against the elements. Designed as a bi-fold to allow the driver to tip the top half down for an unobstructed view. Sidelites wit…

Veiling glare occurs when light reflects on the instrument panel (IP) top surface into the windscreen and creates veiling reflections in the driver’s field of vision.

It reduces the contrast of the road scene making it harder for the driver to detect different objects while driving.

Veiling glare is dangerous because the reflections from the instrument panel and other ghost like images have the ability to completely blind the drivers’ point of vision. Light that is reflected or scattered from a vehicle windshield toward the eyes of a driver creates a veiling luminance that the driver must look through in order to see the roadway ahead.

To what degree this phenomenon will affect the driver depends on how strong the reflections are and the lightness of the background environment. When driving towards a light background the veiling glare is barely visible but if the background is dark the effect of the reflexes increases significantly and can create a dangerous traffic situation. A good example of this is when you drive into a tunnel or garage on a sunny day.

It’s possible to divide veiling glare into two types. One type is when the entire instrument panel reflects into the driver’s eyes and creates a veil of reflecting light, which decreases the contrast in the entire field of vision and makes it hard to see the road. This type of veiling glare is highly dependent on the lightness of the IP material as shown. This has been a driving force in Original Equipment Manufactures (OEM) offering only one IP top cover in matte black. This not only mitigates veiling glare but also reduces part number warehousing and man-hours.

The other type is when veiling glare creates disturbing reflection effects in the windshield, so called ghost images. The reason for this disturbing reflection is contrast differences on the instrument panel caused by split lines, different shapes and features like defroster grills and labels. The stronger the contrasts are, the greater is the risk for annoyance for the driver. Usually, the reflections from an instrument panel reflecting up into the windscreen consists of a mix of both types of veiling glare.

I initiated a study while working at General Motors in the mid 1990s to investigate which factors affected the intensity of veiling glare. The result showed that windshield angle, gloss/texture of the IP, value or tone of IP material and IP angle had the greatest effect on the amount of veiling glare. To minimize the amount of veiling glare, you have to work with the design of the instrument panel angle and surface as well as the angle of the windshield. In many cases designing a quarter moon brow shading the gauges will mitigate the glare emanating from the instrument cluster. The sun angle also has, of course, a great effect on veiling glare, but it’s a factor you can’t control.

The specular glare angle is unique for a given windshield and IP angle combination and is calculated with the following formula:

Many studies have been made to determine the windshield angle’s importance to the amount of veiling glare. At General Motors Veiling Glare is part of the windshield manufacturing criteria. Some latitude is given to this because the failure modes are not as critical as other criteria for glass manufacturing. Windshield angles larger than 60°, measured from the vertical plane, have a rapidly increasing effect on the proportion of reflected light and cabin heat load. It’s clearly preferred to try to use a windshield angle below 60 degrees but there’s also the possibility to work with anti – reflective coatings to decrease veiling glare.

“Glass Engineering: Design Solutions for Automotive Applications,” addresses the theme of glass from the manufacturing stage to the design, installation, and warranty aspects. It also flags, along the way, the pitfalls and the important questions to ask. More importantly, it provides the reader with practical ways to solve the not-so-obvious problems associated with the use of automotive glass.

Because they are uncomfortable with the status quo

Rebels have the ability to transform lives, transform our society. They will drive change and a new tomorrow. They will help you prioritize and focus on the things that matter now and in the future

#ZbindensLaw If your boss(s) wanted a #10minutesketch they could do it themselves. What they really want is a #40hrstudy for their meeting ….. in 10min

Source: Why You Should Join Automotive Glass Engineers On LinkedIn

I created Automotive Glass Engineers on LinkedIn to provide a community forum as well as a talent base for potential clients, suppliers and talent acquisition firms. As you know glass is very specific [commodity] and glass for transportation, which by the way is in the top two vehicle warranty failure modes is highly specialized with a very narrow bandwidth of talent.

You will find some of the most capable technical specialists in the transportation field. Automotive Glass Engineers specializes in product, process and bonding adhesives.

We have a best selling, award winning author that can provide you with a step by step “Design Solutions” book covering subjects like DFMEAs, PFMEAs and design tables showing the costs and ramifications of your decision making process.

Plus, here is what we talk about and the resources you’ll find:

Topic of the Week:
Each week a group member will post a new topic for discussion. I invite you to share your thoughts & expertise. My goal is to make you think and learn.

Engineering Issues:
Whether you’re an OEM, supplier or talent acquisition specialist. If you have questions, answers or concerns, voice them!

Sound interesting? I hope so. I invite you to get engaged in discussions, ask questions, share your thoughts.

8 minutes of Nurburgring crashes: bet you can’t look away 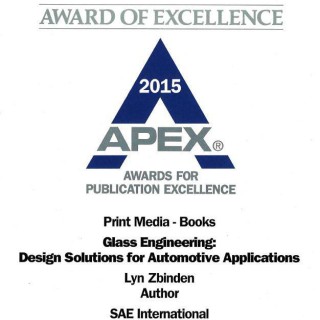 is written by Lyn R. Zbinden, a mechanical engineer and glass specialist. With a career spanning over 30 years in the automotive industry, breaks down complex concepts into “knowledge bites,” building up a solid base that both students and practitioners can profit from, and use on a regular basis, for years to come.